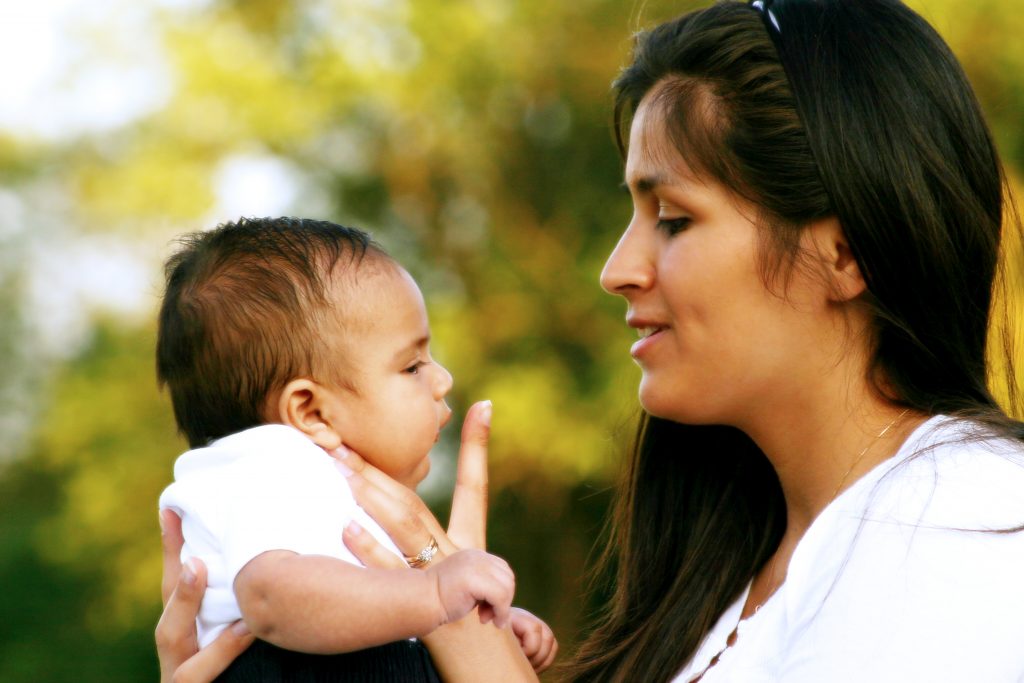 Babies are born wired for language and communication, especially from the nurturing adults around them. They communicate with us through crying, cooing, babbling, gestures, etc. Although their efforts may not yet be pronounced words, nonetheless, they are still attempting to communicate a need or a want. It’s our job as parents to be in tune with their cues and respond accordingly to their messages.

According to the Center for the Developing Child at Harvard University there is a concept called serve and return. Researchers state that when babies cry, coo, babble, or point to an object in efforts to interact with an adult, they are in a sense serving a message at the adult with hopes that some kind of response will be returned. An example might be if a baby points to a mirror (the serve), and then the adult says the name of the object or points to it or begins to describe it (the return). Thus, an ongoing back and forth interaction begins between baby and adult. Almost like a game of tennis with a ball being served back and forth from player to player. You can imagine how unstimulating a game of tennis would be if one player does not send the ball back. Or even worse, what if there no other player on the other side of the net? Okay, I’ll stop with the tennis metaphors. Nonetheless, the concept of serve and return helps to build important brain architecture for the baby.

The ongoing interaction stimulates neurons in the brain to begin firing off synapses and forming neural pathways. Pathways, that if they aren’t stimulated early on in life, run the risk of “pruning” or dying off much too early. It’s almost like a use or or lose it phenomena. That being said, there are many misconceptions or myths where some adults believe babies are too young to have a conversation; that all they need to do is to eat and to sleep. This couldn’t be further from the truth! Yes, babies do need to eat and sleep, but just as important, they need social interaction from nurturing adults. Similarly, just as their hungry tummies crave food, and their tired bodies need rest, their brains long for nurturing social interaction.

There is no secret formula to supporting social interaction other than. . .engage with your baby! Make eye contact, mimic sounds and facial expressions, and most of all talk to your baby. Talk to your baby about what is around you and what you are doing in the moment. Tell your baby stories and read to your baby. Dance and sing with your baby. There is no magic toy or video that could ever replace the loving sound of your voice, your touch, or your perfect face. You already have all the super power tools in just you being you! Follow their lead and follow what they gaze towards. If your baby coos, coo back. If your baby points at an object, bring them closer to touch it and talk about what it feels like. Just by interacting with your baby and being in tune and ready to “return their serve” you will help support important brain building!

The Parenting Hub would love to hear from you. Please send your resolutions to: parentinghub@earlylearninghub.org