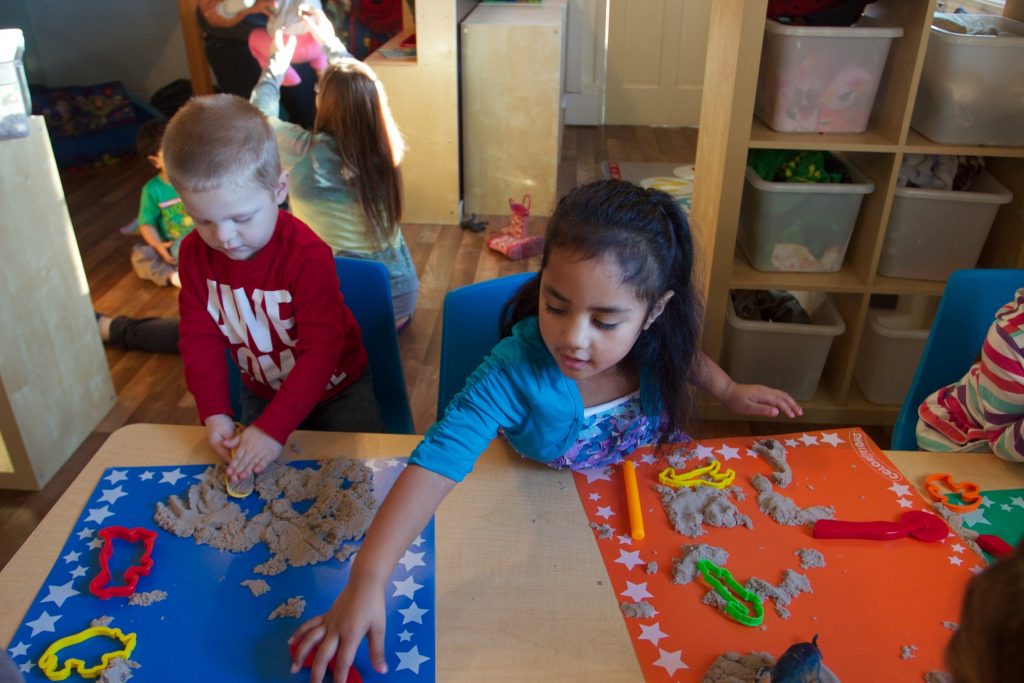 “Play nice!” — Goodness, I’d be a wealthy woman if I had a dollar for everytime I said that to my kids as they dashed out the door to play with the neighbors. After the millionth reminder to my kids to “play nice” it dawned on me. . .just what does “playing nice” really mean? What am I directing my children to do when they go outside with their friends? I actually googled “nice.” According to Miriam-Webster, nice is defined as: pleasant, agreeable, satisfactory, fine, or subtle. On the flip side, I looked up the definition of what it means to “be kind.” Kind is defined as: having or showing a friendly, generous, and considerate nature. Whoa! Reminding my children to either play NICE or be KIND are two very different concepts. The biggest red flag was that friendship or anything associated with the concept of friendship wasn’t even mentioned in the definition of nice! Here we are using the word nice to describe how to play when it’s much more appropriate to use nice when describing how a new pairs of shoes fit. For example, “These shoes fit nice.” We would not say, “Oh these new shoes fit so kind!” You getting my drift?

By telling my children to be nice, I’m actually instructing them to be pleasant and agreeable. Sure, children who are pleasant and agreeable show the beginning characteristics of what emcompasses being a good friend. At the same token, however, telling my kids to be agreeable almost has the connotation to be compliant, to go against their own wishes, opinions, or ideas for the sake of being agreeable. Does this mean I’m telling my kids to be nice on the outside and ignore their inner voice that triggers when they disagree or feel uncomfortable with the way a playdate is evolving? Now I feel like I might be putting my kids at risk of not speaking up for themselves because it will label them of not being “nice.” How does this differ from reminding them to just “be kind?”

Reminding my kids to “be kind” I convey the message of, “be genuine and carry yourself with consideration.” By being considerate, I’m asking my kids to put careful thought into their actions and words when playing with friends. I want them to be intentional and consider their own personal feelings as well as the feelings of those they are playing with. The directive for them to “be kind” gives them permission to really analyze how they will respond and interact with their peers all the while being genuine. It reminds them that if there is a disagreement between friends, they are capable of carefully considering how everyone is affected, and still be okay with how they conducted themselves regardless the outcomes. I’m sure we’ve all heard this echoing amongst a crowd of kids, “Mom! (fill in child’s name here) isn’t playing nice!” Nine out 10 times that’s code for, “(said child) isn’t doing what I want.” A blunt reminder of “Hey, play nice!” sends the message that the only solution to an impasse between two peers is for one party to buck up, agree, and be compliant. It passes judgment on the child who is so-called not “being nice.”

Reminding children to “be kind” indirectly calls them out on their own behavior and words and to carefully consider how their actions are affecting everyone involved. With supportive parents and caregivers children can learn to “be kind.” Here is my challenge to you, parents. Talk to your children about what it means to be kind versus what it means to play nice. Start a conversation with them about the two concepts. Introduce different adjectives or synonyms to help them understand the differences between the two. Ask them, “What does being kind look like? Is it the same as playing nice?” Talk with them about how sometimes they may find themselves struggling to play nice but that above all, we can hope that everyone aspires to be kind.

The Parenting Hub would love to hear about the discussions you have with your children about being kind and how it differs from playing nice. Please send your comments and stories to: parentinghub@earlylearninghub.org